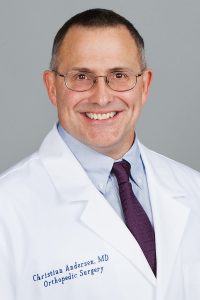 Homes for Our Troops is an organization that Agility Orthopedics feels very strongly about. Their core mission is to build homes with necessary adaptions for the brave men and women of our military who have been severely injured while serving their country. Since 2001, more than 6,000 American soldiers have been killed and over 40,000 have suffered injuries. Although the Homes for Our Troops organization has built over 100 specially adapted homes for our injured heroes, they estimate that there is a need for well over 1,000 homes. Unfortunately, many of those injured who have sacrificed so much are now faced with a loss of independence. Supporting an organization like the Homes for Our Troops is a great way to help our brave hero’s.

Last year at the Run for the Troops 5K banquet, Christopher Baker MD of Agility Orthopedics was invited to be the keynote speaker. Still an active member of the US Army, Dr. Baker has served our country as an orthopedic surgeon at both the Walter Reed Army Medical Center and the Bethesda National Naval Medical Center in Washington DC. Also, he was stationed in Iraq where he was awarded the Operation Iraqi Freedom Medal for his work as an orthopedic surgeon.

During his speech, Dr. Baker spoke of the sacrifices those who choose to serve in the military make every day. He spoke of how those sacrifices build as one who joins the military, then makes the additional sacrifice to be deployed into a war zone; Soldiers who regularly sacrifice their time with their family for a year at a time. He then spoke of the sacrifice that military personnel make when they get injured. The time they have to spend in the hospital recovering from their injuries. When they do finally make it home, they often find that their homes are filled with physical barriers that make what used to be so easy, nearly impossible to complete. 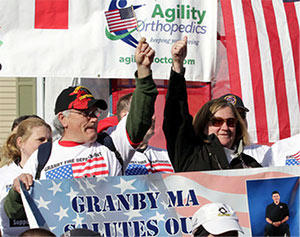 Perhaps they are unable to go up the stairs to their second floor bedroom or fit their wheelchair into the bathroom to get ready for bed. Often they are unable to reach food items or dishes that are stored in a cabinet. They may not even be able to get up the stairs from the outside of the house. These barriers to eating, sleeping, dressing, and living a normal life all represent continued sacrifices that they have to make on a daily basis.

Well, the Homes for the Troops help solve these problems. Building one floor homes with open floor plans, roll in showers, and roll under cook tops & sinks, and other necessary adaptations to allow those injured to return to an independent lifestyle. These homes help to return their independence and restore the freedom to their lives that they helped preserve in ours.

For the past 3 years, Agility Orthopedics has been a proud sponsor of the Run for the Troops Road Race and Walk to benefit the Homes for the Troops Organization. The proceeds from this event go directly to the Homes for Our Troops organization. This year’s event will take place in Andover, MA on April 7th at 9:00 AM. Also, there is a dinner at the Wyndham Hotel in Andover on April 5th starting at 6:00 PM. If you would like to participate in the dinner or the run/walk event, please visit www.runforthetroops5k.com to register.

If this date has passed or you are unable to attend either of the events, I encourage you to visit www.homesforourtroops.org/donate to make a contribution to this worthy cause. Every penny counts in this battle to return freedom and independence to our military hero’s.

Bill is the founder of this event in Andover.