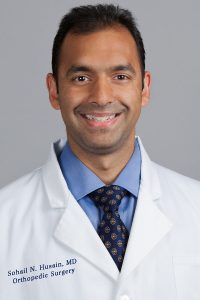 Have you ever woken up with your hand feeling numb? This sensation of numbness and tingling is often caused by a pinched nerve. When the nerve is pinched, its blood flow is cut off. It stops working properly and the result is pain, numbness and tingling. Sometimes the nerve is pinched in the neck, sometimes in the elbow and sometimes in the wrist. Carpal tunnel syndrome occurs when a specific nerve, the median nerve, is pinched in the wrist.

The median nerve passes through a narrow tunnel. Three sides of the tunnel are composed of hard bones called the carpal bones. The fourth side is composed of a ligament: the transverse carpal ligament. People with carpal tunnel syndrome usually develop pain, numbness and tingling in the thumb, index, middle and sometimes the ring finger. Sometimes pain can travel up the arm. In severe cases the muscles of the hand can get weak and start to waste away. When the symptoms of carpal tunnel syndrome are severe, surgery is sometimes the best option to relieve pain, prevent worsening of symptoms and long term damage to the nerve.

Carpal tunnel release surgery is one of the most common surgeries performed by hand surgeons. When done properly for the correct reasons, it is one of the most reliable and successful surgery hand surgeons perform. Carpal tunnel release surgery has been performed for decades. The surgery is usually done with light or moderate sedation; similar to what you would get when undergoing a colonoscopy (fortunately, bowel prep is not required in the case of carpal tunnel release). The surgeon places a local anesthetic, a numbing medicine, into the wrist. Traditional Open Carpal Tunnel Release is performed by making an incision in the palm dividing the transverse carpal ligament and opening up the carpal tunnel. Over the years techniques have been refined. Experienced surgeons can perform the surgery with much smaller incision; this is referred to as Mini Open Carpal Tunnel Release.

Endoscopic Carpal Tunnel Release surgery can be performed with a small incision in the creases of the wrist with the help of a special camera that lets us look inside the carpal tunnel and open it up from the inside. The incision, usually less than an inch, is made to blend in with the wrist crease. After spreading soft tissues out of the way to make room, a camera is inserted into the carpal tunnel. Once a clear view is obtained of the transverse carpal ligament, a special blade that is attached to the camera is deployed, dividing the ligament and taking the pressure off the median nerve. In all of these surgeries a soft dressing is applied and patients can start moving their fingers right away. Heavy lifting is avoided until the wound heals, usually for 2-4 weeks.

When considering carpal tunnel release surgery, your most important consideration should be in the skill of your surgeon to perform carpal tunnel release regardless of the exact method. With an experienced surgeon, you are likely to have a successful surgery and recovery. My recommendation is to pick your surgeon and have them perform the surgery they are most experienced and comfortable with.